ATTENTION: FACE MASKS ARE ENCOURAGED BUT NOT REQUIRED.
HomeAbdominal Aortic and Thoracic Aneurysms
Back to Our Services

The aorta is the largest artery in your body, and it carries blood away from your heart. Your aorta runs through your chest, where it is called the thoracic aorta. When it reaches your abdomen, it is called the abdominal aorta. The abdominal aorta supplies blood to the lower part of the body. Just below the abdomen, the aorta splits into two branches that carry blood into each leg. An aneurysm is a weakened and bulging area of a blood vessel. If an aneurysm ruptures, it causes internal bleeding with a less than one in five chance of survival. Abdominal aortic aneurysms are associated with more than 15,000 deaths per year in the United States. In a large study performed by the Veterans Administration, abdominal aneurysms were found in four percent of men and one percent of women over the age of 50 years. The highest risks for aneurysms are in men, active and former smokers and family history of aneurysms. The risk of rupture increases sharply as the aneurysms grow. Screening for aneurysms and following aneurysms for the optimal timing of repair is essential in preventing ruptures. The second most common site for an aortic aneurysm is in the aorta closer to the heart referred to as the thoracic aorta. Aneurysms can also develop in other places including: 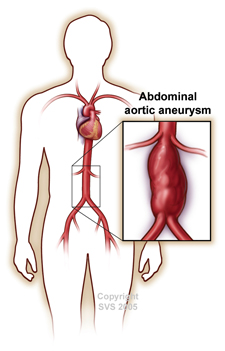 A stent graft is a metal cage wrapped in a special fabric that is placed, while in a closed position, through small incisions in the groin. The stent is threaded into the aorta under x-ray guidance with either local, spinal or general anesthesia depending on patient needs. The graft is then released into the correct position to seal the aneurysm. Stent graft has the advantage of a lesser risk of complications and much faster recovery. Patients typically do not need to be put to sleep and go home after 1 or 2 days. However with stent grafting there is a risk of the aneurysm coming back therefore the stent grafts must be followed with special CAT-scans or ultrasounds for life.