ATTENTION: FACE MASKS ARE ENCOURAGED BUT NOT REQUIRED.
HomeCarotid Artery Stenosis
Back to Our Services 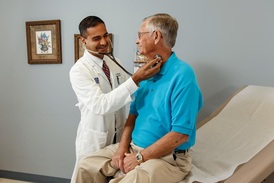 Narrowing of the carotid arteries from plaque is responsible for one-third of strokes. Strokes are the leading cause of disability and the third cause of death in the United states.  The artery becomes narrowed or blocked by the buildup of cholesterol often referred to as plaque.

Most strokes happen when a piece of plaque breaks off from the diseased artery and travels to the brain where it cuts off blood flow. This often results in a mini-stroke called a TIA (transient ischemic attack) and the symptoms may resolve rapidly.  Common symptoms of a TIA include weakness or numbness in one part of the body, being unable to speak clearly, or temporary loss of vision in one eye.  The risk of a major stroke is very high after a TIA necessitating urgent evaluation for carotid stenosis.  Preventing stroke can be accomplished with medicines including aspirin and other drugs that prevent clot such as plavix and aggrenox and cholesterol drugs called statins. Carotid surgery (endarterectomy) or carotid artery stenting is necessary to prevent stroke in specialized cases.  At Savannah Vascular, we have built a tremendous cumulative experience in treating carotid disease with all the available modalities with over 100 years combined experience. 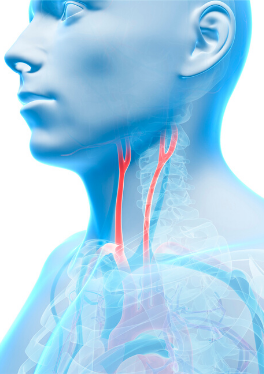 The diagnosis of carotid disease can be done by listening for a sound in the neck  (carotid bruit) with a stethoscope and then performing an ultrasound.  This test is done by a technician to estimate the degree of stenosis and therefore experience in an accredited vascular lab is necessary.  The vascular ultrasound lab at Savannah Vascular Institute is sanctioned by the Intersocietal Accreditation Commission (IAC).  At times an angiogram may be necessary. This involves inserting a catheter through the artery in the groin advanced into the carotid artery and then putting in dye to see the artery directly under x-ray in order to identify the severity and location of the plaque.

When 70% or more of the inner opening of the internal carotid artery is narrowed a “high-grade” blockage is present and opening the artery has been shown to decrease the risk of stroke. The treatment considerations for carotid stenosis are complex and should be discussed with the vascular specialist.

Medical treatment includes the use of aspirin, plavix and cholesterol medications and is very effective. These drugs prevent platelets from sticking together which is a major cause of stroke. 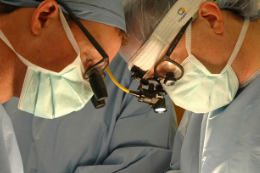 Surgical treatment has been very effective and involves making an incision in the neck and opening up the carotid artery itself and removing the plaque. A small tube is placed into the artery to maintain blood flow during the procedure. The artery is then closed with a patch most commonly. This operation is typically performed with general anesthesia in the United States. 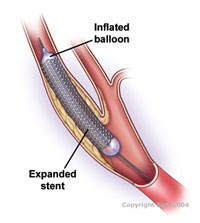 Carotid stenting (left) is a special procedure where a stent (a metal cage) is inserted opening the narrowing and wedging the plaque against the walls of the artery.
Although carotid stenting carries a lower risk of heart attack, the risk for stroke is slightly more than surgery. Carotid stenting is performed typically when the risk for heart attack, nerve injury during surgery or risk to the patient from general anesthesia exceeds the risk of stroke.  This is a difficult decision and often requires the expertise of a vascular specialist with extensive experience treating vascular disease.

For patients with carotid artery disease who are at risk for traditional open surgery, a less-invasive, clinically proven alternative called TCAR – Transcarotid Artery Revascularization is available.

The TCAR procedure is performed through a small incision at your neckline just above your clavicle. This incision is much smaller than a typical CEA incision. The surgeon will place a tube directly into your carotid artery and connect it to a system that will temporarily direct blood flow away from your brain, to protect against dangerous debris from reaching your brain during the procedure.