Vascular Surgery has undergone a paradigm shift in the last decade with a remarkable transition from traditional open surgery to state-of-the-art, minimally-invasive procedures (endovascular therapy). These include laser therapy replacing vein stripping for varicose veins; angioplasty replacing surgical bypass for arterial blockages (circulation disorders); and stent grafts replacing major abdominal surgery to repair abdominal aortic aneurysms. Endovascular therapies have been proven effective in hundreds of published studies around the world and now comprise the majority of all vascular procedures performed in modern vascular surgery practices. However, the popularity and effectiveness of these techniques must always be weighted against the risks and benefits of conservative treatment (medication, life-style changes) and traditional surgical approaches.

Varicose veins affect millions of Americans and cause heaviness, pain, aching, burning, skin discoloration and significant social embarrassment. Traditionally, large varicose veins have been treated by vein stripping. This is a surgical procedure that involves two incisions to isolate the leaking vein. A small rod is passed into the vein and sewn to the top of the vein so that the vein can be peeled out of the leg by pulling the rod from the surrounding tissues. This involved significant bruising and recovery as well as surgical scars.

In recent years, lasers attached to small catheters have been used successfully to deliver heat energy to close off diseased varicose veins without having to remove them. The procedure is usually performed in a surgeon’s office by injecting numbing medicine to make a tiny nick in the skin that is closed with a tape strip. This prevents scarring, general anesthesia or hospitalization. Patients are encouraged to resume normal activities the following day. The vast majority of patients have very satisfying results and little discomfort. Because varicose veins can cause significant discomfort and eventual skin changes, most insurance companies consider this procedure to be medically necessary if you have attempted elevation, exercise and stockings sometime in the past.

Poor circulation and hardening of the arteries are terms often applied to describe blockages in arteries to the legs, brain, kidneys or intestines. The build up of debris and narrowing of the arteries is called atherosclerosis and this affects tens of millions of Americans. Major causes of atherosclerosis include smoking, diabetes, cholesterol and blood pressure elevation, sedentary lifestyle, obesity and inherited disorders. Atherosclerosis is a major cause of leg pain with walking (claudication), stroke and heart attack. Disease progression is minimized by quitting smoking, exercising and controlling your diabetes, cholesterol and blood pressure. Traditional treatments have involved bypassing the blocked arteries with either a superficial vein from your leg or using an artificial tube made specifically for leg bypasses. Both procedures have a high rate of associated risks and recovery. 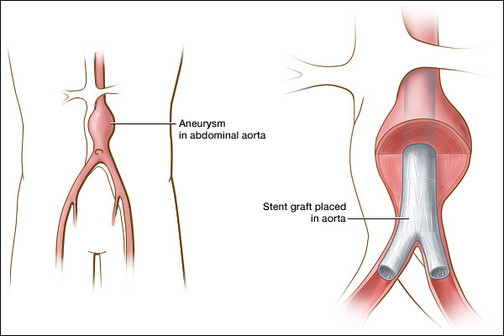 An abdominal aneurysm represents an abnormal enlargement in the main artery in the abdomen (aorta) which carries blood from the heart to the lower half of the body. When the aneurysm enlarges, the wall becomes thinner and weaker and can eventually rupture, causing uncontrolled internal bleeding. Approximately 15,000 Americans die from rupture of abdominal aortic aneurysms each year, making this the thirteenth leading cause of death in the United States. Traditional surgical treatment involves a large incision to place a synthetic graft to repair and replace the diseased artery. This method typically results in long hospital stays, extended recovery and high rates of complications.

Innovative technological advances have allowed surgeons to repair abdominal aneurysms with stent grafts inserted by a catheter-based delivery system through a small hole in the artery in the groin, avoiding any abdominal surgery. The stentgraft is placed under x-ray to internally reline the diseased and enlarged abdominal aorta. These devices have been shown to significantly reduce hospitalization, recovery, complications and death rates. The technique has been proven effective in hundreds of studies involving tens of thousands of patients throughout the world. Your surgeon’s expertise in this area will allow an educated decision on who is a candidate for this procedure and which of the available, FDA-approved devices are best for each individual patient.

Dr. Avino is a board-certified vascular surgeon who specializes in minimally-invasive vascular procedures at Savannah Vascular and Cardiac Institute and can be reached at (912) 352-VEIN or contactus@savannahvascular.com.